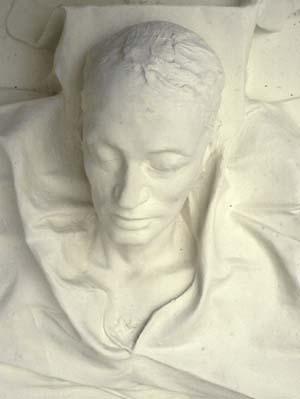 „When he received the invitation, Miklós Melocco had alredy been long preoccupied with the Ady problem (…) For the occasion of 100th anniversary in 1976, a sitting figure of the poet in Tatabánya and a standing figure in Debrecen were erected. In 1977 the heart rendering mask of the dead Ady was put on display in the grass covered area in front of Barbakán in Pécs, the plaster variation of which became the centre point of the composition made for the Museum. (…) Rather than making a simple commemorative statue, both the occasion and the venue inspired the artist to attempt to compose a monument, the idea of which had been fermenting in him for a decade. The refined elegance and subdued grandeur of the Classicist palace as well as the selected room, which has relatively limited space but is made almost infinitely big by two huge mirrors facing each other, proved to serve as an excellent framework for the sculptor’s ideas. Under one of the mirrors, the visitor can see the plaster version of the Pécs statue of Ady, who has been transfigured by death and has achieved the totality of eternal peace. In front of the window, on the right-hand side of the mirror there is a headstone with a life-size figure of Venus of Willendorf (our progenitor), while lavish drapery clouds billow with a vivid richness and solemn discipline from the ceiling between the window and the mirror on the opposite side, and from there to the figure of the poet lying on the bier. The whole composition is presided over by an enormous arm, the symbol of divine power. A tiny human figure (a blessed soul?) is holding on the arm after being swept up from the bier by the swirling flood. In the cloud floating towards the willow the figure of a man with a split open body appears, and he may well be one of the damned. In front of the bier a man overwhelmed by the grandness of the grandiose scene is on his knees with his arms raised towards heaven. He is not mourning, he welcomes the soul which has reached eternal life with a carefree and radiating happiness.(it cannot be an accident that the model of the man celebrating with such abandon was Zoltán Latinovits, who died not long before and whose memory had turned into the symbol of a period and attitude by the time the statue was made.)

In the background, in the shadow of the drapery-cloud-cataract and in front of the other mirror, four talking „civilians” are huddled together separate from the main scene and taken out of its timeless entirety, emerging from their waists up over the rippling cloth of a table. They do not give any sign of being aware of the events swirling around them, they do not even notice the half-naked mythological figure turning towards them. Could they be us? Are they the prodigal blind? In the meantime the mirrors multiply the scene in a complex way, forcing the visitors to let their eyes roam over the sight which is sacral and blasphemously pagan at the same time until they will become part of it themselves just as in Rome where the viewers of Bernini’s „St. Theresa’s Vision” become participants of the miracle, partaking in the wonderful apotheosis of a voluntary mission.”