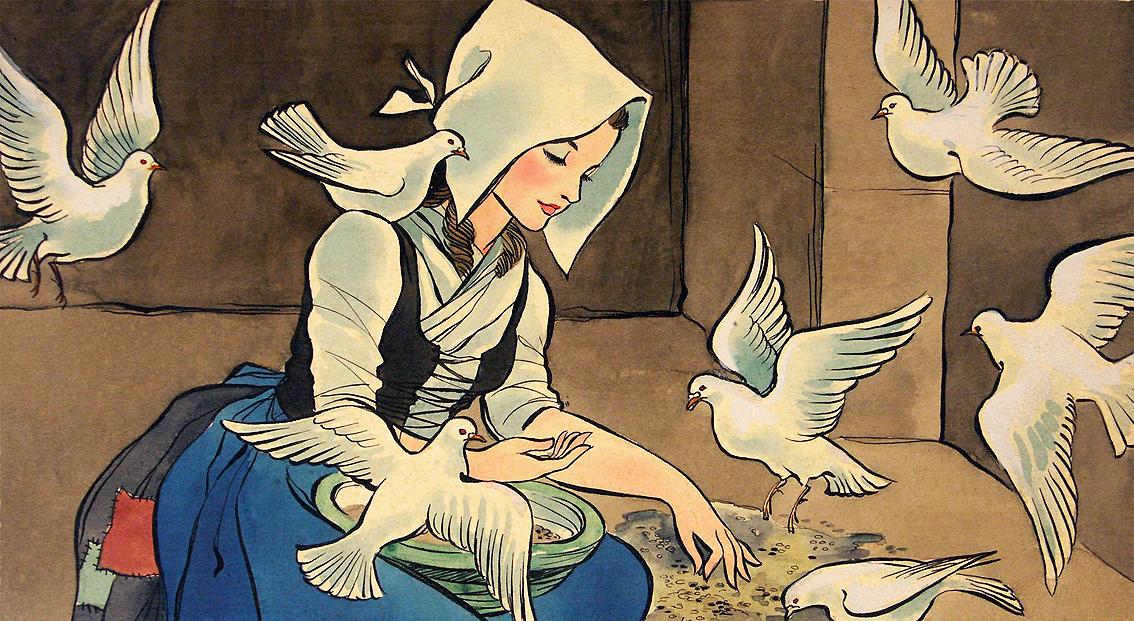 The beginning of her career in applied arts

Her talent for drawing, which she inherited as much from her folklorist father István Györffy and his mantle-maker predecessors as from her exceptionally nimble-fingered mother, Anna Papp, was soon recognised when she was a child. It was her father who inspired her to begin studying folk costumes and ornaments. During her summer visits to Szucság, she made several drawings of the inhabitants of nearby villages and the garments of the Kalotaszeg region. Her first folklore-themed illustration assignments, which included drawings for children, also came from István Györffy.

Besides Transylvanian traditions, Dutch culture also played an important role in shaping her artistic interests and visual culture. To relieve them of the dreadful living conditions after World War I, Dutch and Belgian families hosted thousands of Hungarian children with the aid of the National League for Child Protection. For years, Anna F. Györffy spent months in Rotterdam, with a longer visit of nearly one and a half years between the ages of ten and eleven. Thanks to her affluent hosts, she went to a prestigious school, and made regular visits to the zoo and museums.

“Let me express my warm congratulations for your daughter... as she has a truly adorable personality. And also... because to me her work seems to reveal such talent that will bring you and us so much joy in the future.”

The letter was written by Ferenczy after Anna F. Györffy received recognition for three of her designs submitted to the 1934 winter fashion contest of the National Committee of the Movement for Hungarian Attires.

“... I have so much work that I can hardly get any sleep. I have made the acquaintance of the printer Mr. Kner’s sons..., who supply me with minor illustration assignments. I have specialized myself in drawing for children’s (story) magazines, and I’m doing very well, it makes me so happy! ... I also see Pál C. Molnár twice a week, and I’m having the best of times. He’s a marvellous teacher, and I think I’m going to learn so much from him.”

She began her art studies at the Fashion Design Department of the Municipal School of Applied Graphic Arts in 1933, where she gained practice in artistic fashion drawing and design. Inspired by Hungarian folk art and Art Deco, her designs were recognised by advocates of the movement for Hungarian attires, as well as fashion magazines.

Her achievements in fashion design contributed to her being hired by the Goldberger textile factory in 1935, at the age of 20. As an art designer for the studio run by Elisabeth Paul-Schiff, she designed Hungarian-style patterns, children’s textiles, miniature blue-dying patterns for African export, as well as fabrics, clothes and posters. She worked for the company until 1945, eventually as deputy head of the design department. Later, as a freelance applied art designer, she worked on hand-dyed silk blouses, ceramic jewellery, china dishes, ornamental buttons and tiles.

Anna F. Györffy’s career as an illustrator for children’s stories began in the 1950s, but dates back to as early as the 30s. It was Ferenc Farkas Bisztrai, her husband-to-be (whom she married in 1939) who convinced her to begin learning figure drawing from Pál C. Molnár, and he also introduced her to graphic designer Albert Kner, art director of the Hungária press, who gave her minor children’s illustrator’s assignments. Before 1945, she always signed her artwork as Anna or Panni Györffy.

During the one-party dictatorship, the publication of youth books and magazines was taken into state monopoly and underwent a major expansion. Being less subjected to the scrutiny of the Communist authorities, children’s literature not only offered refuge and livelihood to blacklisted authors and poets from the 50s, it also provided talented artists and designers such as Emy Róna, Ernő Zórád, Károly Reich, Kató K. Lukáts, Piroska Szántó, János Kass and Ádám Würtz with illustration work. Among them, Anna F. Györffy made hundreds of illustrations between 1952 and 1988 for books, slide strips and children’s magazines. Her assignments included drawings for children’s stories, youth literature and students’ books, as well as designing book covers, front pages, foldouts, cut-out toys, colouring books, holiday telegrams, calendars and postcards. The books she illustrated were in such high demand and became so successful, both in Hungary and internationally, that her publishing house, Móra Ferenc Youth Publishing, regarded her as one of their “most outstanding and reputable” illustrators. Several editions of her books sold tens of thousands of copies in Hungary and the countries of the Socialist bloc. Throughout her career, she made illustrations for works by such authors as Elek Benedek, Magda Donászy, Erzsébet Gazdag, Géza Gárdonyi, Endre Gyárfás, Gyula Illyés, István Kormos, Vera Marék, Dezső Mészöly, Ágnes Nemes Nagy, Lőrinc Szabó, Magda Szabó, Katalin Varga, Sándor Weöres and Zoltán Zelk.

Anna F. Györffy was Mária Szepes’s collaborator for three decades, illustrating as many as 15 Pöttyös Panni books. The first book, whose kindergartener heroine was nicknamed after her red polka dot dress and chickenpox spots, was published in 1955, followed by several new episodes of Panni’s story between 1956 and 1988. Some of the books were also published in German and Russian, and the series became especially popular in East Germany.

Throughout the decades, the drawings by Anna F. Györffy rose in significance to match the text of the stories, while their style also underwent some changes. In the new illustrations made for the extended opening volume Pöttyös Panni and Pöttyös Panni’s Diary, both published in the late 1970s, the figures drawn with sketchy outlines were simplified into more geometric and colourful forms to imitate the naïve style of children’s drawings. The popularity of the volumes reprinted in 70-80,000 copies per edition from the 1970s was in great part due to the graphic artist’s humorous and playful drawings. Pöttyös Panni books complete with her illustrations are still among the bestselling books by Móra Publishing.

“The laundry is now open. Would you like to have fresh new fur? Come visit my laundry. All your dirty fur will be washed clean by Mosó Masa”

Mosó Masa mosodája, a children’s spelling book by Katalin Varga on which generations were raised, marks a key achievement in Anna F. Györffy’s career as an illustrator for children’s books. Since first published in 1968, the volume rich with nursery rhymes, poetry and stories has seen nearly 40 editions to date by courtesy of Móra Publishing. The visual world sprouting from the graphic artist’s inexhaustible imagination and creativity largely contributed to the popularity of the book. Drawn with stylized simplicity and playfulness, the characters of the stories all but come to life on the pages of the book, navigating children through a colourful fantasy world. Hard-working animals wear aprons, tiny inhabitants of the glove light candles and climb ladders to reach their home, the stallion who caught a cold is convalescing in a cosy vintage armchair under a chequered blanket, the sleepy little rooster snoozes in a cot, while Mosó Masa and her colleagues use clothes pegs to hang freshly washed animals on the clothes line to dry. Similarly to most of her illustrations, Anna F. Györffy places great emphasis on highlighting peasant culture here: her drawings feature embroidered fur vests, hand-painted chests and the ornamentally carved bench from the patio of her Szentendre home.

Anna F. Györffy had several opportunities to graphically envision classic Grimm tales in a genre which was highly popular before the proliferation of television: slide strips. Hungarian Slide Strip Manufacturing entrusted her with the task of designing the coloured illustrations for Snow White and the Seven Dwarves in 1955 and Cinderella in 1956. The acclaim for her graphics is marked as much by reprints as the fact that, in 1962, a sequel to Snow White was produced with the title The Seven Dwarves on Their Own, and that Sleeping Beauty was also released with Anna F. Györffy’s drawings in 1973. Her illustrations for Grimm are still some of the most sought after among children’s slide strip stories. Her finely drawn characters: the lovely Snow White and the dashing prince surrounded by more realistically conceived animal figures and caricaturistically portrayed dwarves living in their warm forest home (furnished with peasant furniture), complete with all the Baroque, Empire and Biedermeier-style interiors with eye-pleasing background images, make these tales so delightful to read and watch.

Kindergarten in the Jungle

Released in 1963, the slide strip Kindergarten in the Jungle is a curiosity since, in this case, Anna F. Györffy illustrated her own children’s story. The tale takes children to the exciting world of the loveable indigenous African Madame Bumba’s (or, in the revised 1975 version, Mami’s) animal nursery, where they can follow a typical day of young jungle animals. By virtue of its fascinating illustrations, charmingly drawn animal figures and fetching colours, the graphic artist’s delightful story has not lost its appeal in the last 50 years, and is still popular with children as much as adults.

Anna F. Györffy’s last major work was the virtuoso illustration of Katalin Varga’s Grimm adaptation, Snow White’s Christmas, published by Szépirodalmi Könyvkiadó in 1988. The artist, then 73, enjoyed complete freedom in designing the visual representation of Katalin Varga’s short children’s story. Her imaginatively drawn, lively and detailed images go even further than the text in showing how the heroes and heroines of classic Grimm tales (Snow White and the seven dwarves, Sleeping Beauty, Puss in Boots, Mother Holle, Hansel and Gretel, the musicians of Bremen, and so on) are preparing for their Christmas Holidays. The graphic artist even included a charming map to help children navigate through the Grimm Brothers’ colourful fantasy world.